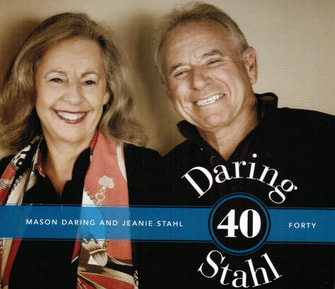 Tickets - On sale June 1st please check back for the link
$50 - box seats
$25 -General Admission
Mason Daring is a critically acclaimed film and TV composer and Jeanie Stahl a premier vocalist. They met at a Cambridge Club in 1973 where Mason was performing and Jeanie auditioning. Mason was attending law school, driving a cab and performing at night. Jeanie was in the backstretch of college, managing the college coffee house, putting on rock concerts and performing in area coffee houses. On the basis of an immediate respect for each other's musical talents and aspirations, they formed a permanent temporary union. They recorded two albums together, appeared on national and local radio and TV, won area newspaper readers’ polls and were dubbed by the Boston Globe the "darlings of the folk scene" and by the New England Folk Almanac, “the best the era had to offer.” Eventually they pursued separate careers but continued to work together on selected music projects and, in 2015, released a new recording entitled, 40, celebrating 40 years of collaboration. The CD reflects their interest in a broad range of styles, from classic songs of the 30' and 40's to contemporary folk and country and original compositions. As Steve Morse (former and longtime Boston Globe music critic) wrote, “It is a beautiful work of art, featuring five original songs rich in wisdom, experience and graceful harmony vocals…There remains a magic to their collaboration…”

Mason Daring is a music producer and critically acclaimed feature film composer for 75 motion pictures and mini-series. His long list of credits includes the scores for sixteen of John Sayles’ movies, including The Secret of Roan Inish, Eight Men Out, Matewan and Lone Star. His television scores include the Emmy nominated score for Bailey’s Mistake, the Emmy award winning theme for Yankee Magazine and the long-playing themes for PBS's Nova and Frontline. His major film credits include, among others, From Earth to the Moon, The Opposite of Sex, Music of the Heart, and Where the Heart Is. Mason was the founder and driving force behind Daring Records, a sub-label of Rounder Records, which produced and released albums for a variety of artists including Bill Staines, Bob Franke, Billy Novick, Guy Van Duser, Duke Levine, Butch Thompson and Jeanie Stahl.

'Mason Daring is to a director what a Stradivarius is to a violinist. He makes moments that might well go by unnoticed spring to life in a way that they suddenly touch the soul of the audience.' - Wes Craven

Jeanie Stahl grew up performing classical and folk music. Her voice, said one critic is, "so rich and smooth, it should be bottled and sold." In addition to her albums with Mason, Jeanie recorded three solo albums, all produced by Mason. She also starred in eight music videos of vintage songs which aired nationally on PBS as part of the Masterpiece Theater series Love in a Cold Climate. Her songs and vocal recordings have been featured on television specials and in films, including John Sayles' movies Lianna and Return of the Secaucus Seven as well as other feature films including the cult hit, The Opposite of Sex. Most recently, working with longtime collaborator, lyricist and writer, Harriet Reisen, she composed the music for On the cover of Time: A Memoir with Songs, and starred in the presentation workshops in Marblehead and at the Gloucester Stage.
UA-80810796-1